Good morning! It’s the beginning of Wasteland Weekend! Our Creative Director Farren Fox is stationed out in the deserts of Kern County California to attend the show, and will be sharing Fractured Lands bottlecaps and shirts with the wastelanders there! We’ll have lots of pictures coming in, but wanted to share this first shot from our friends V2A who’ll be performing that weekend! 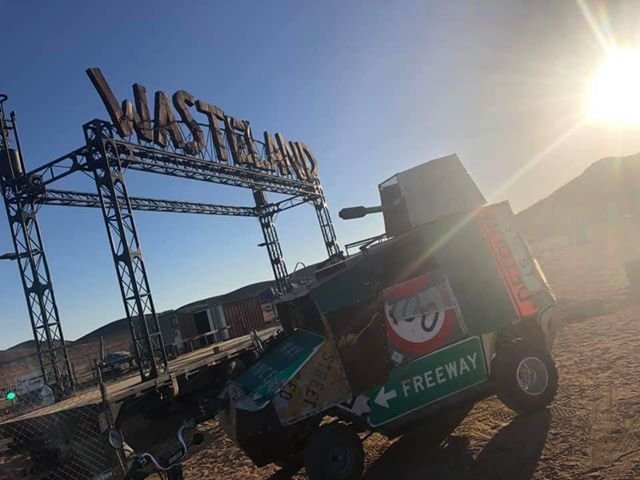 Check it all out at their official website! http://www.wastelandweekend.com/

For the rest of us, STORMRIDERS, RAIDERS, WARMONGERS and wastelanders, we’ll have to suffice with tearing it up online! We’re heading into our weekend with a quick update from the dev team! This includes a new performance fix that reduces draw distances and a change to the storm to increase visibility for those in-to-out shots in the safe zone. The update should go out after 11:30 AM PT You can read the full update notes below:

Most of the work on our plate is centered around Season 2! We’ll have more to share with this soon, sorry for the wait!

We hope everyone enjoyed the Free Weekend, we’ll definitely be hosting another to commemorate Season 2 along with some other promotions we hope will entice you back to Fractured Lands. In the meantime, grind for those Season 1 items, and we’ll join ya along the way!

What a Lovely Weekend
Robert

Toggle This
We use cookies to ensure that we give you the best experience on our website. If you continue to use this site we will assume that you are happy with it.OkRead more